I am a consultant-developer and dragonboat paddler two-in-one, and very much into finding ways to help ourselves improve.

A rather large amount of gunk (not pictured as it was rather gross) had accumulated at the bottom of the mouse wheel assembly which was causing the scrolling to become erratic.

Some work needed to disassemble the whole setup, but it all works like new again. Jewellers screwdrivers necessary.

This post arose due to an attempt to understand why one boat with apparent equal strength is faster than another. What resulted was an investigation into how applied paddling pressure and boat mass affects variables such as paddle speed, effective acceleration.

This was originally an email draft to the coach group, but as it became rather wordy, I felt it would be better served as a blog post.

END_OF_DOCUMENT_TOKEN_TO_BE_REPLACED 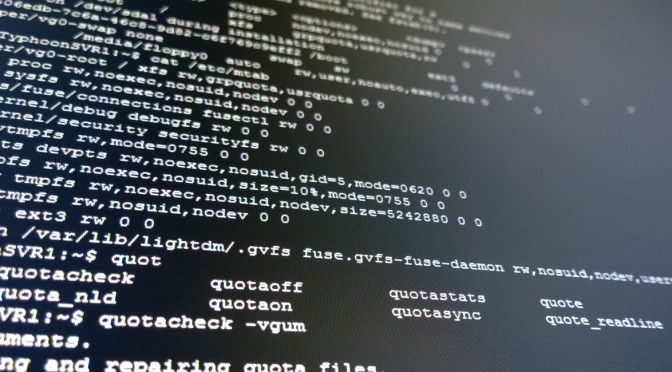 Just a quick pointer for anyone else scratching their head after a kernel update. For reference this relates to running virtualmin on Ubuntu 12.04 LTS.

Before the kernel update via the package manager I had no issues creating new virtual servers through virtualmin. However, strangely enough, on creating a new virtual server and progressing through the user creation stage, this shows up:

Failed to create virtual server : setquota: Mountpoint (or device) / not found or has no quota enabled.
setquota: Not all specified mountpoints are using quota.

First step was to check the mountpoints:

Sure enough, the quota filesystem options are all specified there.

Turning off and on didn’t solve anything (quotaoff, quotaon) This doesn’t seem related to the Debian/Xen root mount issue mentioned in the Virtualmin forum.

It dawned that this is an issue with the kernel, so thankfully I came across this post. Quota support may have been removed from the default virtual image, but I only need to perform a modprobe and enable the quota service as described at http://www.virtualmin.com/node/23522 :

After this, setting up the virtual server was a breeze.

I’ve been implementing Backgrid.js into a project, and the backbone.js setup is working very nicely – I’ve managed to create a few extensions quite easily adding new reusable features.

One snag, and the author does mention this in the FAQ:

I am a big fanof RequireJS, and use it quite extensively in some of my larger projects. Indispensable for creating reusable code.

With RequireJS 2.x, the short answer is:  yes we can.

Simply add backgrid to your requirejs.config and shim it up:

Now in a new definition, I just reference backgrid:

and I can simply require them on demand:

I’ve omitted other definitions (like jQuery and Backbone) for clarity. The css plugin is extra, and the stylesheet can be included by default otherwise. The code above is taken from an actual live project, and heavily simplified.

As for other existing Backgrid extensions, here’s how I included backgrid-select-all:

My Linode web configuration hasn’t particularly been optimised much beyond the default settings, so it was a kick up the backside to do something when the email alerts warned me about high load.

Incidentally, the investigation showed a client’s site was being swamped by large number of connections, and strangely enough, most of those connections (if not all) came from a class B subnet which the IP lookup tools point to the MoD in London. Bizarre.

Note: the rest of this post is mostly concerned with removing mod_php+MPM prefork completely on a server with Virtualmin GPL to use FCGId + MPM worker + PHP CGI, so it won’t really apply to you if you do not have mod_php installed nor Virtualmin .

The configuration is in a typical LAMP stack with Debian + Apache + PHP, with Apache 2.2 in the default Debian configuration with MPM prefork, and Virtualmin for ease of client site configuration. PHP has been set up to run via mod_fcgid which allows better process separation between each virtualhost when compared to mod_php.

MPM prefork spawns one child process per request. This module is not the most efficient out there, but  it works with everything including mod_php (it is required to run prefork with mod_php). In comparison, MPM worker spawns child processes which in turn spawns multiple threads to handle each request. Threads are like lightweight processes which can share resources and memory space with each other within the same process, so a threaded design can be quite efficient. The downside with threads (and this is a simplified overview) is the trade-off of sharing space – crashed threads can bring the others down within the process, whilst the  isolation of process-based design is inherently more secure.

There is one other module – the event MPM which as an experimental variation of the worker MPM, and strives to work like the event-based Nginx (which itself is gaining huge kudos points for its efficiency), but it’s still relatively immature and is only properly supported with Apache 2.4 onwards.

It’s clear that the worker module has good potential for serving more users, however there were a few snags with my Virtualmin-enabled setup.

Enabling mpm_worker means mod_php cannot be enabled, and incidentally, mod_php was somehow installed alongside FCGId. Virtualmin, which installs FCGId by default, handles this by disabling mod_php in each virtual server configuration that has been enabled to use FCGId:

However, only mod_php understands this directive, so when mod_php is disabled, Apache will refuse to start, and report that it does not understand “php_admin_flag”!

So, to move away from mod_php + mpm_prefork:

If you are certain that you are not using mod_php, most of this can be skipped.

1. Configure each site in Virtualmin to use FCGId.

This can be performed by going to Server Configuration > Website Options > Website and PHP Options: PHP script execution mode for each virtual server.

2. Remove any php_* directives from the Apache virtualhost configurations.

To preview the PHP directives present:

I simply did a bulk edit to comment them out with a #:

3. Move any necessary php directive options to each site’s php.ini

These should be configured in php.ini either directly (Virtualmin for Debian usually places them in /home/webuser/etc/php.ini)  or via the virtual server’s configuration screen in Virtualmin: Services > PHP 5 Configuration > Edit Configuration Manually

Optional as installing mpm_worker will do this anyway, but provides a quick test with Apache failing to restart if there are still php directives lying around.

From the command line:

As root, or sudo:

This will remove mpm-prefork and mod-php5 as conflicting dependencies, and restart Apache2 with mpm-worker. Redhat/CentOS users would change their configuration instead (/etc/sysconfig/httpd).